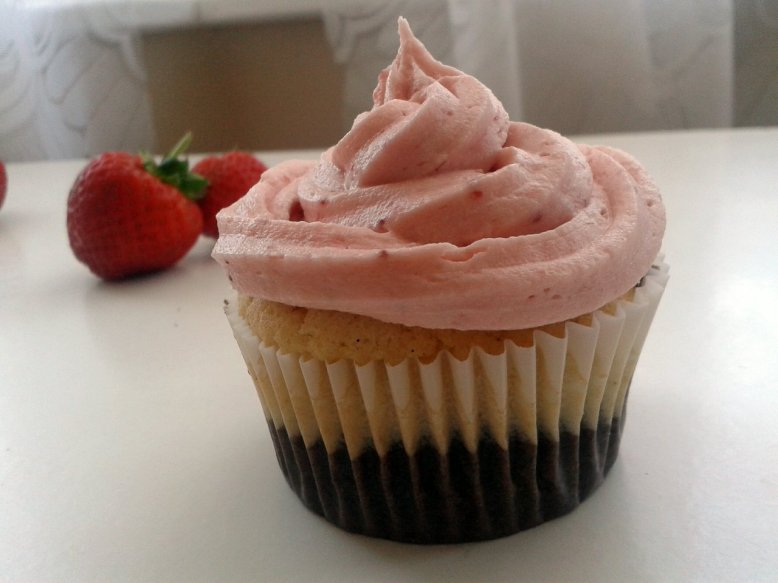 Up until a couple of days ago, it seemed that summer had well and truly arrived in Britain. We had weeks of glorious sunshine, and when I was invited to my first BBQ of the year, it was the perfect excuse to bake something wonderfully summery. I was inspired by this beautiful neapolitan cake on Ellie Bee’s blog to create a cupcake version.  And here it is. These little beauties consist of a layer of chocolate cupcake topped with a layer of vanilla, and then finished with the best strawberry frosting I’ve ever tasted. The fact it’s made from real strawberries probably explains this.

Everyone loved them at the BBQ, and plenty of people sheepishly sidled over for a second one. (N.B. I wasn’t guarding my cupcakes, I just happened to be standing near the food table for most of the evening. That’s where all the best people are during parties, right? *awkwardly eats another Dorito*)

1 cup + 4 tbsp strawberry puree (Unless you can get hold of this, you’ll need to start with a little less than a punnet of strawberries. Yes, just less than a punnet is a legitimate measurement.)
1 1/2 cup (345g) unsalted butter at room temperature
5 – 5.5 cups (625g – 690g) powdered sugar
1/2 tsp vanilla extract
A few drops of red food coloring (optional)

For the chocolate cupcake

– Preheat oven to 180c (350F) degrees.
– In a large bowl, whisk together the cocoa powder and baking soda.
– Pour in the boiling water and whisk until the bubbling subsides and everything is well blended, then allow to cool for 5 minutes.
– In another bowl, blend together melted butter, vegetable oil, granulated sugar, vanilla and salt with an electric hand mixer until well combined.
– Stir in the egg and egg yolk, saving the egg white.
– Blend in the cocoa mixture, then blend in the double cream.
– Gradually mix in the flour and blend until well-combined.
– Divide the mixture between the 22 muffin trays — around a generous teaspoon in each.  Spread the mixture into an even layer and set to one side.

For the white vanilla cupcake

– Sift the plain flour into a medium-sized bowl.
– Add the baking powder and salt and stir until well combined.
– Using the handheld electric mixture, whip together the butter, sugar and vanilla bean seeds until pale and fluffy.
– In a separate bowl whisk together milk, egg whites and vanilla extract until well blended.
– Gradually add the flour mixture to the butter/sugar mixture until completely combined. Mix on a high speed until the batter reaches a fluffy, almost mousse-like consistency.
– Now divide the chocolate mixture between the cupcake cases, spreading gently into an even layer so that the mixture reaches the sides of the cases.
– Bake for about 16-19 minutes, until a skewer comes out clean.
– Leave on the tray to cool for a few minutes, then transfer to a wire rack to cool completely.

For the strawberry icing

–  If, like me, you can’t find strawberry puree, you’ll need a little under one punnet of strawberries. Using a hand blender, blend your strawberries until you have 1 cup and 4 tbspn worth of pureed strawberries.
– Add the puree to a small saucepan and simmer, stirring occasionally, until reduced to 6 tbsp. It should take around 10 – 14 minutes (it’s worth measuring the mixture and if it isn’t quite 6 tbsp then return and continue to simmer until it has reduced enough).
– Pour into a small bowl, then pop in the freezer, stirring every so often, until cool. It shouldn’t take long.
– Whip the butter with the electric whisk until nearly white.
– Add an initial cup of icing sugar, then blend in the puree. Keep adding the icing sugar until you reach a good fluffy consistency — it needs to be relatively stiff to pipe.
– Once the cakes are cool, either pipe or spread the frosting on top. Et voila! 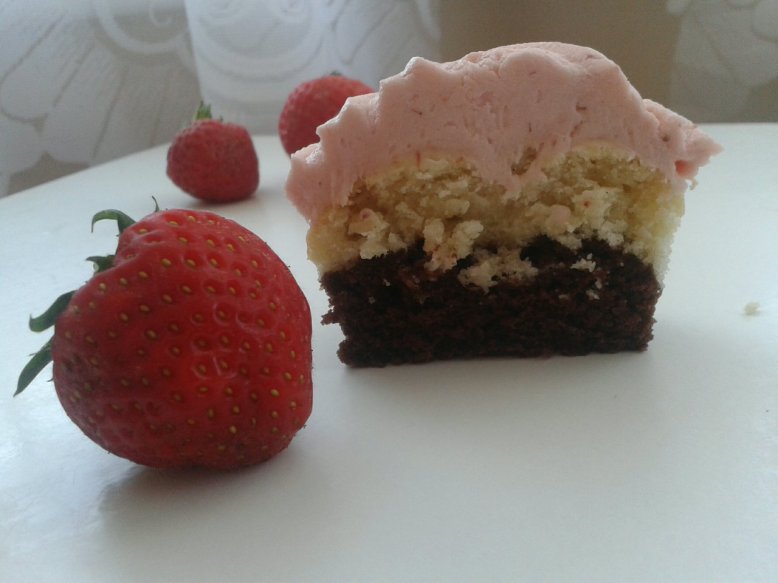 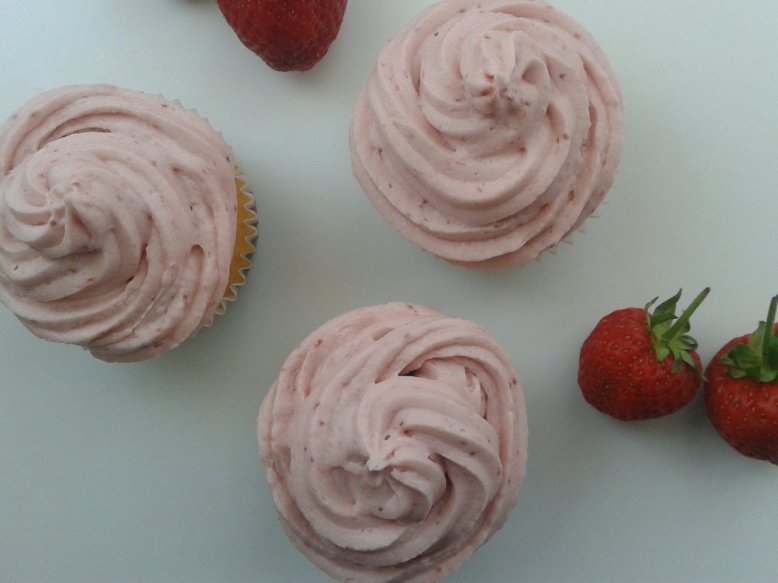 Oh, and this was my first time piping – too! It’s a little wobbly, but not too bad for a first attempt, right?

Listening to I get around by The Beach Boys, Sunshine of your Love by Cream and The Curse of Curves by Cute is What we Aim For.

This recipe is from Cooking Classy.  All other content is © Rebecca Daley and ohtogoawandering, 2015.