When I was still at primary school, whenever we went out for dinner, it was to the same pub. It was called The Grapes, at a tiny village near where we lived called Wrea Green. In Year 3 we went on a geography trip there to see an example of a ‘typical’ village. As the officious seven year old that I was, what I remember most from that trip were the bright red clipboards, and the difficulty I had filling in my worksheet neatly on them. Seven year old troubles, eh? I must have been a ball as a child… But I digress. Whenever we went to The Grapes, I had Bubble & Squeak. A food surely named for children, and completely unrelated to what it actually is, of course! Leftover mash, plus lots of yummy veg and some stuff to bind it all together, fried until golden in butter. I loved it every time. Then we moved house, stopped going to The Grapes, and I promptly forgot all about Bubble & Squeak.

Then recently I rediscovered and made it myself, and it was as yummy as I remember. 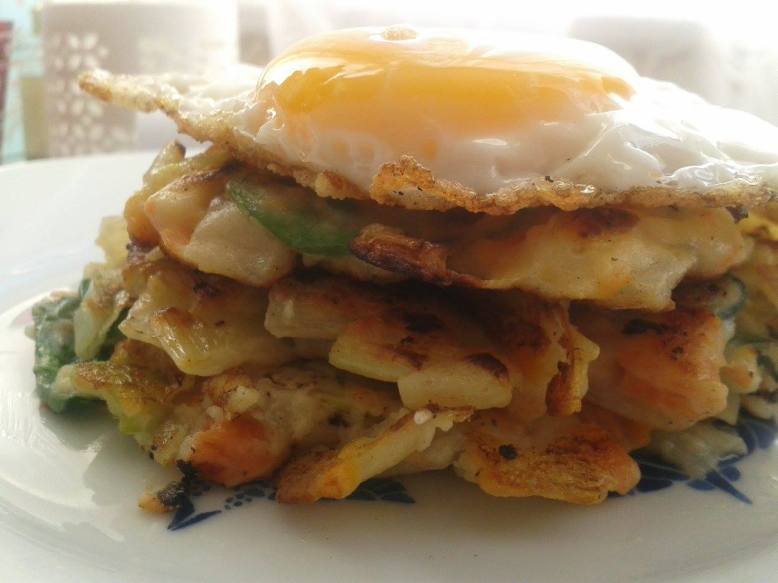 (Very flexible: you can throw most things in, that’s kind of the point)

– About half a leek

– Salt and pepper, to taste

– Oil or butter, for frying

– You can of course use leftovers, in which case the veg would already be cooked, and you can skip the first few steps, but if you’re starting from scratch:

– Prep the potatoes and carrots as you prefer, then simmer in a big pan of boiling, salted water for about 20 mins or until they’re soft

– While they boil, chop up your other veg (I favour the onion, leek and cabbage combination) pretty finely, and saute in a different pan using oil of your choice

– Once the potatoes and carrots are cooked, drain and tip them back into the pan. Add the other veg and give it all a thorough mix/mash.

– Add the egg and the flour, as well as salt and pepper to taste, and give it another thorough mix until everything is combined.

– At this point, it’s best to refrigerate the mix to firm it up (I learned this the hard way…! It’s fine if you fry up the patties straight away, but you’ll have to make peace with them falling apart somewhat.)

– Once you’re ready to fry, heat some oil or butter in your pan (no need to wash after frying up the veg in my opinion…) and scoop in a burger-sized dollop of the mixture. Press it down gently with the back of a fish slice or a fork until golden and crispy on one side. Then carefully flip and cook the other side until that’s golden too. (Unless you have a million pans and hobs, you’ll probably need to do this in batches)

– Wahoo. You’re done. I’ve made these quite a few times now, and can thus say from experience that they are amazing with a fried egg. I’ve also had them with sausages, and once with bacon. But whatever else you choose, I’d say that tomato ketchup is absolutely essential.

This recipe is very slightly adapted from A Girl Called Jack; Jack Monroe is a very cool lady and a fab food writer specialising in yummy budget recipes. Definitely check her out if you haven’t already!

Everything else is © Rebecca Daley and ohtogoawandering, 2015.